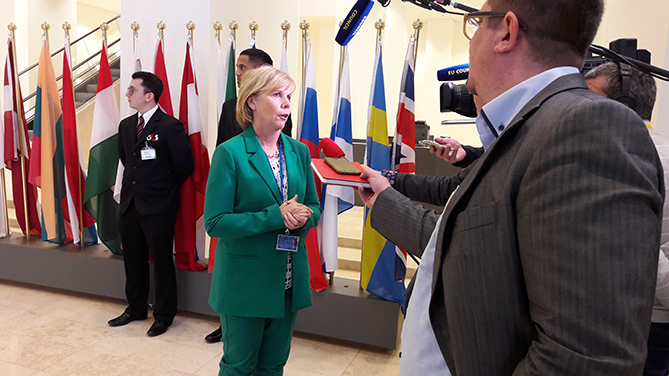 The EU justice ministers discussed, among other things, the development of anti-corruption measures and the strengthening of fundamental rights at their meeting on 7 October 2019.

Anti-corruption measures are part of the efforts to strengthen the Union’s common values and the rule of law. Corruption weakens the shared value base and undermines citizens' trust in the authorities.

“The fight against corruption must be intensified in the Union. It is important that we work together and create common rules at international level to combat corruption. The aim is, through these measures, to be able to detect corruption more effectively than before”, said Minister of Justice Anna-Maja Henriksson, who chaired the meeting.

At the meeting, the ministers adopted the so-called Whistleblower Directive strengthening the protection of individuals reporting suspected malpractice throughout the EU.

“The protection of whistleblowers improves the detection of corruption and thus promotes the rule of law. All EU citizens must be able to safely report on any violations of EU legislation that they have detected, without a fear of losing their job, for example”, Minister of Justice Henriksson said.

The EU's actions to combat hate speech were also assessed at the Council meeting. The EU Framework Decision on combating certain forms and expressions of racism and xenophobia obliges the member states to criminalise public incitement to violence or hatred directed against a group of persons or a member of such a group defined by reference to race, colour, religion, descent or national or ethnic origin.

Hate speech within the meaning of the Framework Decision constitutes a crime also when it occurs in an online environment. To complement EU legislation, the Commission and social media companies such as Google, Facebook, Twitter and Microsoft have jointly agreed on a code of conduct to combat illegal online hate speech. The companies are supported in their efforts by a network of so-called trusted reporters, which includes numerous civil society organisations. The Finnish Red Cross is a member of the network.

“We share responsibility for ensuring that the internet does not become an arena of illegal hate speech and violence,” Minister Henriksson emphasised.

In addition, the Council discussed the EU's accession to the European Convention on Human Rights.

“I am very pleased with the position adopted by the Council today that the EU will be able to return to the negotiating table with the parties to the European Convention on Human Rights in Strasbourg. This was a major step forward after years of standstill”, Henriksson said.

The Justice and Home Affairs Council also adopted conclusions on the strengthening of the implementation of the EU Charter of Fundamental Rights at their meeting today. Furthermore, the ministers had a discussion with the Director of the EU Agency for Fundamental Rights on the future challenges related to fundamental rights in the Union

“The strengthening of our common values, such as fundamental rights, is of key significance for the activities of the EU. Safeguarding these values is essential not only to ensure the functioning and credibility of the Union but, first and foremost, to ensure the trust of citizens,” Minister Henriksson stressed.